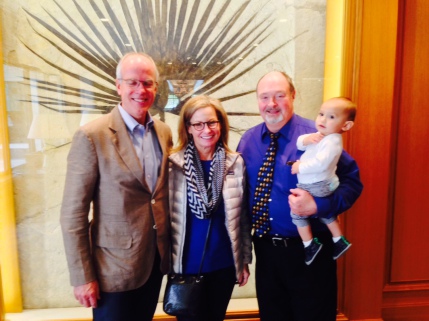 In 1987 West Jordan was an emerging city. There was lots of open space and plenty of farms. A new hospital and high school created a sense of identity for the young city. Bob Landenburger, the CEO of Jordan Valley Hospital; and Craig Dearing, President of the West Jordan Chamber of Commerce, believed the city need a Rotary club. Teaming up with Harvey Cahoon, the 3 businessmen approached key and influential people in the community to form a club. The club was chartered in 1987 (see original charter list). Today, only two charter members remain – Craig Dearing and Kelly Atkinson.

Kelly and Craig were recently (2015) united with Bob and his wife, Suzi. The Landenburgers have traveled across the U.S. in pursuit of their careers. They are presently retired in Boise, Idaho.

"Bob and Suzi were the moving force behind starting a club in West Jordan,” stated Craig Dearing. They were the architects of creating a club that has grown to be a powerhouse in District 5420.