People of Action | Making a Difference

The West Jordan Rotary Club is all about making a difference. Whether it is distributing dictionaries to third grade classrooms within the boundaries of our club (over 2,500 last year), doing a global grant in the Philippines to help farmers irrigate their crops during the dry season, giving a high school student an opportunity to study academically for a school year abroad, endowing high school students with scholarships, or building a safe house in South Africa to prevent the violation of girls and women, West Jordan is there making a difference. If you are similarily interested in doing the same, this is the club for you! For a small sample of our many projects, please scroll below.

The marquee project of the club was the construction of a $500,000 Field of Dreams so disabled children could enjoy America's Past Time - Baseball.

The club secured a $30,000 grant from Rotary International to partner with a Rotary club in the Philippines to bring irrigation water, in the dry season, to the fields of framers through the use of solar-powered pumps.

Each month during the school year, West Jordan meets at West Jordan City Hall to recognize 2 outstanding high school students attending West Jordan High and Copper Hills High. At the end of each year, two students, per high school, are awarded a $1000 eac

For over 25 years, the club has delivered school dictionaries to third graders in Jordan School District. Each year over 2500 dictionaries are given to a child to increase their desire to learn.

The club does regular projects like preparing care packages from refugees in Utah to prevent hunger and foster learning among these families.

The club is also active in doing International Projects such as this one in Costa Rica where 150 scientific calculators were donated to assist Costa Rica High School students in their learning.

The West Jordan Rotary Club has formed a partnership with an NGO to build and maintain a school in South Africa for children orphaned as a result of the AIDS epidemic.

IBAPAH, Tooele County — The town of Ibapah received a big donation, which will help this isolated community when a fire breaks out. Ibapah sits on the west side of the Deep Creek Mountains, about an hour south of Wendover.

“It’s quiet and isolated. We like that,” said Richard Henriod, the volunteer fire chief for Ibapah. “Most people don’t even know where it is.” There’s only one paved road to get to town, which ends at the Goshute Indian Reservation just a few miles south. “It’s very peaceful out here. The solitude, the quiet, the privacy. And there’s no traffic,” Henriod said with a laugh.

However, even in a peaceful place, life can be tough. "For fuel, you have to go to Wendover, which is an hour away. Groceries, you go to Wendover, it's an hour away,” he said. “There are no stores for shopping.” "I guess if you're not used to it, it can be very tough,” said Melissa, who didn’t want to give her last name. “There's no Wal-Mart, no malls, anything, or fast food places." Life is even tougher when there’s a big wildfire burning nearby. Ibapah has a volunteer fire department, but they often have to call for help with those bigger fires.

"By the time somebody calls it in, you're probably looking at an hour and a half, two hours response time probably,” Henriod said. The town has two brush trucks and a structure truck for fighting fires. However, fire hydrants are scarce for the 140 or so who live in Ibapah and the Goshute Reservation. “Half the valley doesn’t have fire hydrants. That’s when we need help,” Henriod said. So, last month, he thought somebody was playing a joke on him when he got a phone call from someone wanting to donate a fire truck.

But, sure enough, during a ceremony in Wendover Friday, Henriod was handed the keys to a tinder fire truck capable of carrying 1,000 gallons of water.

“We are making a gift of our 1983 GMC FMC fire pumper truck,” said Stuart Richardson. “The truck runs great."

Richardson is with the West Jordan Rotary Club. The club bought the truck to give to a small town in Mexico that one of the club's members was from, but too much red tape kept them from getting it across the border. So, they found Ibapah.

"This truck only has 18,000 miles on it. It’s going to work well for the Ibapah people for a long time to come,” Richardson said. The West Jordan and South Jordan fire departments also donated hoses, nozzles and turnout gear.

It is an older truck, but for Ibapah, it’s perfect. “This is good. We’re going to have better fire coverage,” Henriod said. 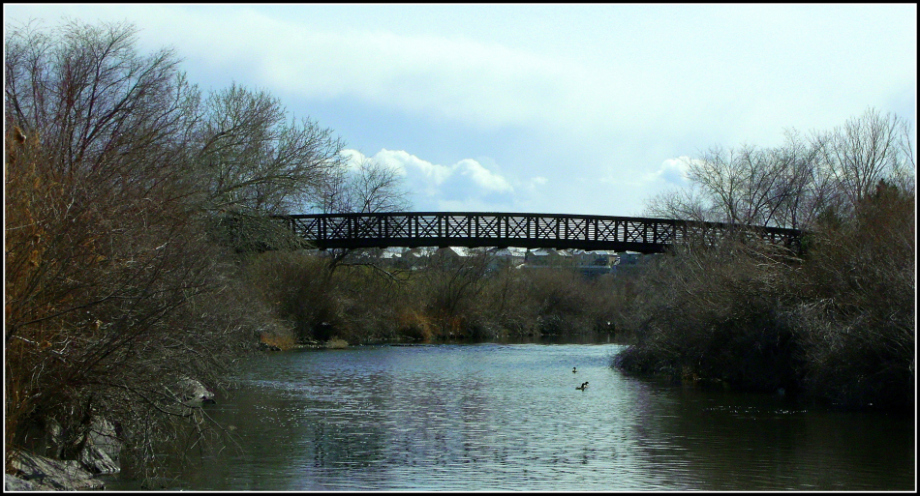 The final leg of the Jordan River Trail is complete “Thanks to Rotary”. Former District Governor Summerhays, secured funding from the Sorenson Foundation and Rotary Clubs throughout the Salt Lake valley to spearhead the completion of the project.